The customer wanted a laptop for use at home. It had to be reliable, have good battery life but be cost effective. I have sold Toshiba laptops for a few years now and have always been impressed with their build quality and reliability. The C850-14D uses a Celeron B820 which is not the fastest CPU in the world but is more than enough for general web and email use. The 500GB hard drive gives loads of space for documents and attachments and the feature list is pretty impressive. 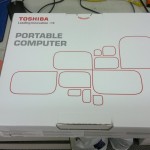 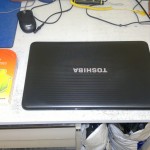 This machine was for a customer who runs a mastering studio. They wanted a machine that was to be used in the office for email and admin stuff but would also be used for some general audio and video production.
The audio tasks would mainly be auditioning audio projects sent in from clients, this could be 2 track masters or possibly even multitrack arrangements. The customer wanted to run Cubase v5, Protools V9 and Wavelab V6. We decided on the Focusrite Saffire PRO 14 audio interface as it has proved itself very reliable on all the software I have tested it on, it also had the advantage of an s/pdif digital in and out which would connect to the customers DAC1 digital-to-analog converter.
The video tasks would not be too intensive, it was mainly going to be used for some promotional web videos and importing video files from a consumer video camera.
I used a StarTech PCI1394MP PCI firewire card to provide 3 x Firewire 400 ports which features a Texas Instruments chipset. These could be used to connect the Focusrite audio interface and any digital cameras.
The customer also wanted an old 5.25″ IDE hard drive caddy fitting as they also had a Mackie HDR unit that they still used. This allowed them to easily copy projects straight on to the PC. I used a StarTech PCI Express IDE Controller card to provide an IDE connection to the caddy which was fitted into one of the 5.25″ bays.
2 Seagate Barracuda drives were fitted, one for windows and all the software and a second drive for data storage of video and audio files.
We also fitted a LiteOn iHES112-115 Blu ray drive, mainly for the larger backup capabilities of blu ray disk.
A CIT card reader was fitted for any projects that might be sent on flash media.
All this was fitted into a Foxconn TLM-397 micro ATX tower as it needed to sit on a desk and be as compact as possible. I have found the Foxconn towers to be very good for their cost. I don’t think they are the most aesthetically pleasing towers on the market but they are fairly robust and don’t cost anywhere near as much as some of the other brands. 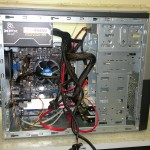 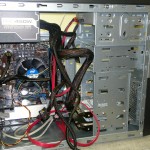 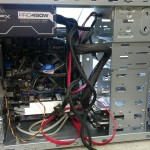 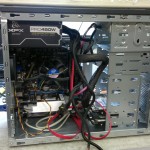 The full spec was as follows;

This build was used mainly as a gaming machine. The Gainward GTX 680 card is very long!
The Antec tower has a removable 3.5″ bay and taking this out leaves plenty of room for the graphics card (see images). I can then fit the hard drive in the 5.25″ bay with the Akasa adapter. I have used this adapter in the past for fitting SSDs, I prefer these kinds of adapters to the brackets as they are less fiddly. The only problem with this is that you don’t get as many spaces for hard drives. I like the Antec NSK4000 tower. It looks good and is robust. The customer did not specify a particularly quiet machine but the Zalman PSUs have proved very reliable and have all the right connectors for the motherboard and graphics card. Suppliers don’t always seem to list the connectors properly on PSUs so it is sometimes hard to work out if it will fit out of the box. I hate using any kind of adapters, though Gainward seem to anticipate this as they provide a power adapter in the box. The CPU is running with the standard Intel stock cooler. The system was set up running Windows 7 home premium 64 bit.
The build went well with no problems. 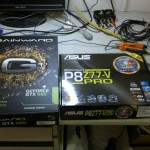 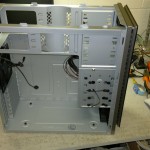 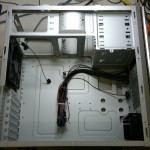 the 3.5″ drive bay has now been removed 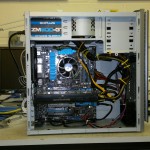 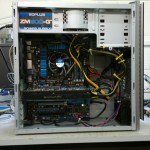 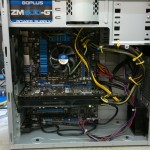 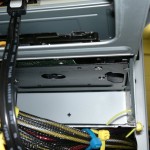 A view of the Akasa drive bay adapter fitted 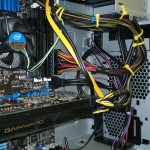 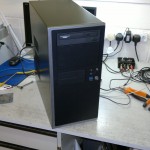 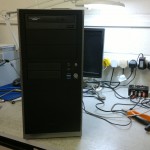 This was a build for a University. It had to be relatively quiet and they wanted it in the rack. It was going to be used for both music production software, mainly Cubase but also some video editing, hence the 2 x 2TB Seagate drives. They were using a Focusrite firewire interface. I have found the Zalman PSUs to offer good noise levels for their cost. You can get quieter PSUs. The Scythe Shuriken also offers good noise levels for its cost. The intel Z68 chipset also offers the option of a raid setup using the the Intel(R) Rapid Storage Technology. There is a related post here.
The customer has commented on how quiet the machine runs. It was set up running Windows 7 Home Premium 64 bit. The StarTech PCI1394MP firewire card has proven to be very reliable with both firewire soundcards and connecting to various cameras. I also removed one of the internal fans to help with the noise levels.
The build went well with no problems. 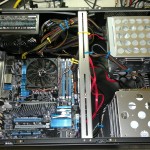 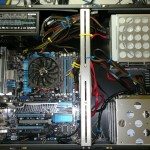 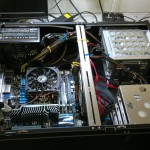 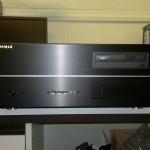 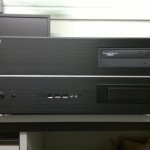 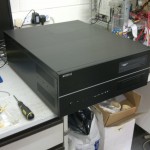