This build was for a photographer. Their old machine was starting to creak. After being brought in for repair a couple of times we decided to build a new machine. The customer was running Adobe Photoshop CS 6 with Adobe Lightroom 4. The software was mainly used for simple editing tasks, nothing too intensive, though processing raw images can be very slow if the resources are not available. We decided to build the machine around an Intel Ivy Bridge Core i5-3570 with 16GB RAM. This would provide the performance necessary for an efficient workflow.

Adobe have abandoned their support for Nvidia’s proprietary CUDA GPU acceleration found in earlier versions of their software, in favour of OpenCL. The Mercury graphics engine allows you to use other manufacturers graphics processors for GPU acceleration. This will speed up certain tasks but also allow you to utilise a number of options that are unavailable if you do not have a supported graphics card.

For this build we decided to stick with the on board Intel HD4000 Graphics, as this is supported by Photoshop and for the kind of tasks the customer would be running, it did not really seem necessary to add an expensive separate graphics card. Which could always be added at a later date if it seemed necessary. 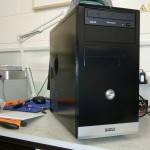